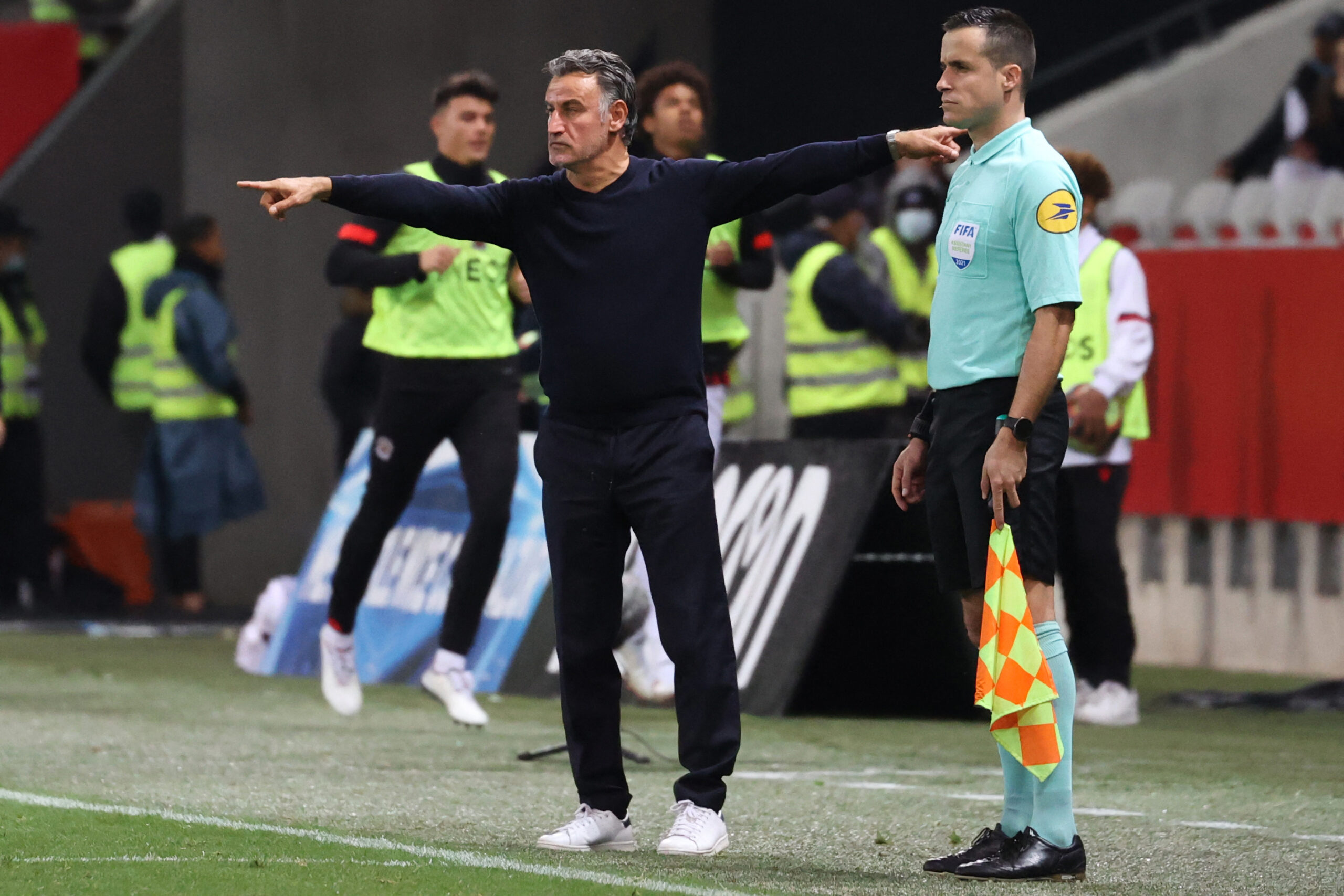 From Nice’s clear-cut win at Brest to Paris Saint-Germain’s hard-fought draw at Lyon, let’s take a look at the three talking points from Sunday’s Ligue 1 action.

Christophe Galtier, the very man who led Lille to a historic Ligue 1 title last season, continues to deliver the goods in France’s top-flight with Nice.

Widely regarded as one of the best managers in France, the 55-year-old is doing an impressive job at the Allianz Riviera as a 10-men Les Aiglons brushed Brest aside with an overwhelming 3-0 win away from home.

Nice picked up where they left off in 2021, putting three unanswered goals past mid-table opponents to solidify their place in the Ligue 1 top-three race.

Despite being left a man down following Morgan Schneiderlin’s straight red in the 20th minute, the visitors took Stade Francis-Le Ble by storm, painting the start to the new calendar year with flying colours.

Kasper Dolberg, Andy Delort and Amine Gouiri were on the scoresheet as Nice recorded their third league win in a row to extend their lead over fourth-placed Rennes to five points.

Let’s not forget that this Nice side, barring a few summer additions, finished ninth in the Ligue 1 standings last term.

They are now second at the half-point of the season, with Galtier seemingly on course of bringing Champions League football back to the Alpes-Maritimes.

An uneventful scoreless draw at mid-table Nantes was not the kind of start former Club Brugge manager Philippe Clement was hoping for when penning a two-and-a-half-year contract at Monaco in January.

After winning three successive Belgian Pro League titles while in charge of Genk and Brugge, Clement took over the managerial reins from Niko Kovac this winter.

Monaco parted with the Croatian tactician in the wake of a come-from-behind 2-1 win over Rennes in the final round of 2021 Ligue 1 fixtures, navigating his side to sixth in the standings.

However, Kovac’s exploits were deemed insufficient by the club hierarchy, leading to his dismissal earlier this month.

Clement, who filled in the Croat’s shoes at Les Monegasques, would want to forget his touchline debut as soon as possible after his men attempted just one shot on target at Nantes.

In fact, he has goalkeeper Alexander Nubel to thank for helping Monaco avoid defeat at the Stade de la Beaujoire as the Bayern Munich loanee pulled off a few vital stops to keep Nantes at bay.

With third-placed Marseille now six points away, Clement will have to improve his side’s game if he is to replicate Kovac’s last season’s feat and achieve Champions League qualification.

Lyon’s hopes of clawing their way back into the top-five race suffered an epic blow as Paris Saint-Germain hit back to eke out a 1-1 draw at the Groupama Stadium.

Lucas Paqueta fired Les Gones into the lead only eight minutes from the first whistle, but Thilo Kehrer’s late equaliser left the hosts languishing in 11th in the Ligue 1 standings.

Lyon have now drawn their last four top-flight matches on the trot despite taking the lead in each scoring affair in this sequence, with the pressure ramping up on head coach Peter Bosz.

Paris’ visit to the Groupama Stadium could have been a turning point for Les Gones’ abysmal domestic campaign, but Paqueta and co again lost their nerve late on.

With a host of first-team stars unavailable for selection, Les Parisiens have set their sights on Chelsea loanee Conor Gallagher to improve their midfield department.

And while PSG remain firmly in the driving seat to dethrone Lille this season, Lyon could be facing their first mid-table finish since 1995/96.