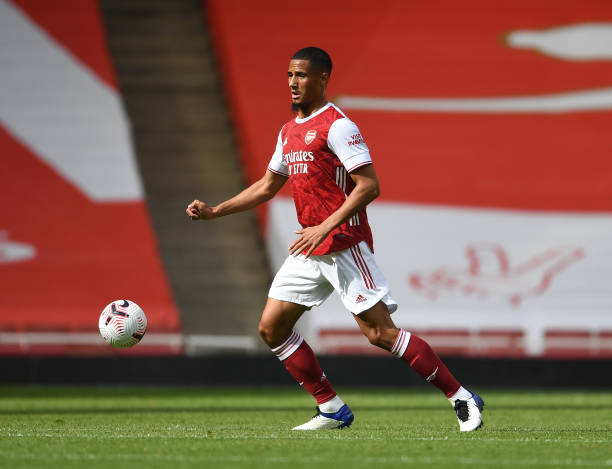 Arsenal defender William Saliba appears set to join Ligue 1 side Nice on loan for the remainder of the current campaign, a report from Sky Sports News has revealed.

The central defender is regarded as one of France’s best upcoming talents, but he has yet to make the breakthrough with the Gunners whom he joined from Saint-Etienne in the summer of 2019.

As part of the transfer agreement, Saliba spent the previous campaign on loan with Saint-Etienne, but he was restricted to only 17 appearances after missing part of the season with metatarsal fracture.

Saliba was involved in a couple of pre-season games for the Gunners this summer, but he has yet to make his competitive debut for the north London giants in any competition.

He was included in the Premier League squad which was submitted in October last year, but has not made the matchday squad even after the number of substitutes were increased from seven to nine.

Earlier this season, Gunners boss Mikel Arteta said that he is frustrated with the situation involving Saliba and acknowledged that the player needs another transitional year after his reduced game time last term.

Saliba could not secure a return to Saint-Etienne on a temporary basis last summer, but he is now on the cusp of joining Nice, who replaced Patrick Vieira with Adrian Ursea as their manager last month.

The youngster is regarded as a part of the club’s future plans and hence, no option to buy has been negotiated. Nice won’t pay any loan fee, but have agreed to cover the players wages in full.

Nice started the campaign with high expectations and they were top of the league after two matchdays. However, they have since struggled for form with only four victories from the next 14 games.

The club possess the youngest squad in Ligue 1 with an average age of just over 23, but their ambition of grooming young players has not quite worked out for them this season.

They recently parted ways with Vieira after two-and-a-half years at the helm, but the results have not improved with only five points accumulated from as many league matches under Ursea.

Their defence has never been a strong point for them and it will be interesting to see whether Saliba can shore up their backline as they look to climb up into the top half of the table.

Nice are presently 12th in the French top-flight with 22 points, 14 adrift of leaders Lyon. At the start of the season, president Jean-Pierre Rivere said that the club will be eyeing a top-five finish. They are presently six points adrift of the target.