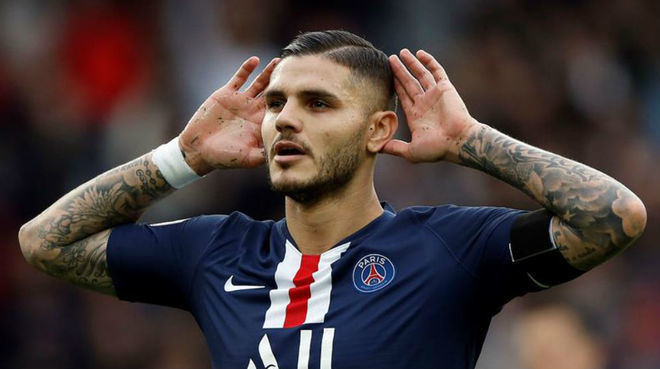 Inter Milan striker Mauro Icardi is open to the prospect of signing a permanent deal with Paris Saint-Germain despite his initial preference to return to the Serie A this summer, a report from Calciomercato claims.

Icardi joined Les Parisiens on a season-long loan from the Nerazzurri last summer and he has since been an influential player for the capital outfit, having netted 20 goals and registered four assists from 31 appearances.

Earlier in March, a report from Calciomercato claimed that the centre-forward does not see his long-term future with the French champions but the same publication now cites that he is open to extending his stay with the club.

Les Parisiens currently have the option to buy Icardi for around £62m and that should be considered as a reasonable asking price for the Argentine, who is at the prime of his career.

Meanwhile, it has been reported that only Juventus could change the player’s transfer stance but in our opinion, that may not happen with the Bianconeri currently in a tight financial situation.

The Serie A holders have recently introduced a maximum salary cap of £5.37m for new signings amid the financial impact of the ongoing coronavirus pandemic.

Furthermore, they are understood to be considering the sale of at least four first-team players including Miralem Pjanic to lower their overall wage bill which remains the highest in the Serie A.

The reigning Italian champions lack the presence of a young striker to compete with Gonzalo Higuain after the surprise departure of Moise Kean to Everton last summer.

Higuain has obviously been tipped to head through the exit door but the Bianconeri don’t seem in a position to land Icardi unless the Nerazzurri are open to a part-exchange deal to reduce the asking price for the Argentine.

Elsewhere, Les Parisiens may have to decide on Edinson Cavani’s future, suppose Icardi makes the permanent switch to Parc des Princes during the next transfer window.

The Uruguay international struggled to break into the lineup in the recent Ligue 1 season due to injuries and the competition from Icardi, who was preferred to start alongside Kylian Mbappe up front.

He was, however, a regular starter in the games leading up to the coronavirus shutdown and the club have a decision to make on their record goalscorer whose contract expires at the end of next month.